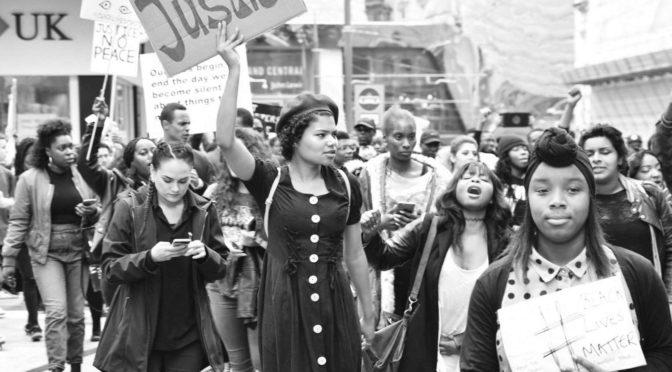 An opportunity for historians to engage with activists.

Malachi Thomas is one of the organisers of Black Lives Matter protests in Nottingham. In November 2016 he was convicted of unlawfully obstructing a highway having used foam-filled “lock-on devices” to link himself to other activists before lying across tram lines outside Nottingham’s Theatre Royal during a “national day of action” in August.

Tippa Naphtali is the founder of 4WardEver UK and the cousin of custody death victim, Mikey Powell, from Birmingham. Established June 2006, 4WardEver provides a one-stop-resource for case profiles, news and event details, useful resources, statistics, appeals, and more in relation to deaths and abuses whilst in custody; including the death penalty, other injustices and human rights abuses in the UK and internationally.

Dr Christienna Fryar is starting as a lecturer of the history of slavery and unfree labour at the University of Liverpool this July. Previously, she spent four years as an assistant professor of history at SUNY Buffalo State. She is completing her first book, The Measure of Empire: Disaster and British Imperialism in Postemancipation Jamaica, which explores how imperial disaster politics belied contemporary popular narratives of Jamaica’s ruin in the eight decades after emancipation. Her work focuses on the history of emancipation as the history of Britain, the British Empire, and the British Commonwealth since 1800.

Dr Kennetta Perry specializes in Atlantic World history with a particular emphasis on transnational race politics, empire, migration and movements for citizenship among people of African descent in Europe, the Caribbean and the United States. Her book, London Is The Place For Me:Black Britons, Citizenship and the Politics of Race (Oxford University Press, 2015). Her book examines how a largely Afro-Caribbean population of Black Britons advocated for citizenship rights and transformed the political landscape in Britain in the decades following World War II.